On 27th September our annual Wreford Watson geography lecture at Edinburgh will be given by the novelist and essayist Will Self. His title, ‘Decontaminating the Union: Post-Industrial Landscapes and the British Psyche’, will doubtless give an audience of geographers in Alex Salmond’s Scotland plenty to chew on.

I’m looking forward to seeing whether my colleagues ‘savour it or spit it out’, to paraphrase Richard Rorty. Pretty fun either way, I suspect.

Will Self, whose latest novel Umbrella was last week shortlisted for the Booker Prize, will need little by way of introduction. The same can hardly be said for James Wreford Watson (1915-1990) in whose memory the lecture is held, funded in part by the Edinburgh University Club of Toronto.

Wreford Watson is probably better remembered as a poet than as a geographer and if this dual identity seems less unusual these days, Watson can be credited as something of a pioneer.

Born in China to Scottish Presbyterian missionaries, he spent the first half of his academic career in Canada eventually becoming ‘Chief Geographer’ – a enviable title, you have to admit – for the Canadian Government.

In 1954, Watson moved back to his alma mater here at Edinburgh where he took up the Chair in Geography.  That same year, he received Canada’s highest literary honour – the Governor General’s Medal for Poetry – for his collection Of Time and the Lover which, as with his other poetry work, was published under the name James Wreford.

Though Watson’s geographical work is by no means unimportant, his contributions were to fields that now seem rather obscure. Who now thinks of geography as ‘a discipline in distance’?

On the other hand one might find some correspondence with contemporary intellectual tastes – in affect and enthusiasm, for instance – which are evident in his 1983 Presidential Address to the IBG:

Geographers can’t afford to miss out on passion – far less dismiss it. Geography without passion is about as alive as a body without blood – ready for the grave diggers.

By far the most important of Watson legacies is his insistence on the centrality of literature. It was, he said, ‘the soul of geography’ and an essential part of a geographical education. He even boasted that he had ‘never written a [geographical] article or a book without an appeal to literature’. 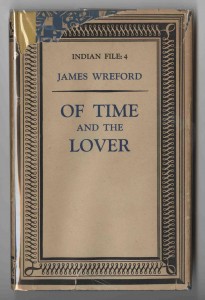 The converse is also (mostly) true: his poetry usually bears the trace of his professional career, evident in poems such as ‘Cross Section’ and ‘Aerial Survey’.

Of Time and the Lover employs the language of geography to detail bodies in luuurve. By his own account at least, he seems not to have missed out on any passion.

It is earnest stuff: a suggestive topography of rivers; valleys; hollows; shallows; depths; days of summer heat and silken rain; surfs of passion; trembling leaves; and elms laden with drizzle.

Is it as bad as I’m making it sound? Probably not. To say that it is ‘of its time’ is to gloss matters that would make it a suitable subject for Gillian Rose’s critique of the landscape tradition in geography.

Try this, from ‘Identity’:

All his geography projects

on the mollweide of her hips,

and yet there is no map can trace

the well known frontier of their lips-

that war-torn boundary and bridge

O both their eagle is and dove;

themselves on this side, but on that

a greater than themselves they prove.

‘There are lapses of inspiration and of taste in Mr Wreford’s book’ wrote Northrop Frye, ‘but there is also a dignified simplicity and a sincere eloquence’. Allowing for the genre, that feels about right.

Much of Watson’s poetry tended towards pastoral, vaguely Christian elegies – a form which, like that of his geography, is now deeply unfashionable. It’s hard not to wonder what he would have made of The Book of Dave.

One might argue, at a push, that Watson set the stage for thinking of geography as a literary project or, more plausibly, for thinking of literature as a geographical project. And it is to this stage that we are pleased to welcome the geographically-inclined Will Self.