It is not enough that particular buildings are deemed unusable. Nor will simple demolition suffice.

It is the very ideal that must be destroyed: the postwar modernist ideal in which housing as well as healthcare was a legitimate object of public planning. ‘The universal provision of good housing’, wrote the late Robin Cook, ‘is just as much an impetus to an egalitarian society as universal education’.

No mainstream political party now believes this. And somehow this undefended ideal has become synonymous with the architectural style in which it was imperfectly realised. We think of Red Road as being quintessentially Modernist but many within the architecture movement felt that such quick design for the masses – ‘public building without airs and graces’ in the words of Red Road architect Sam Bunton – devalued the elite currency of their style. 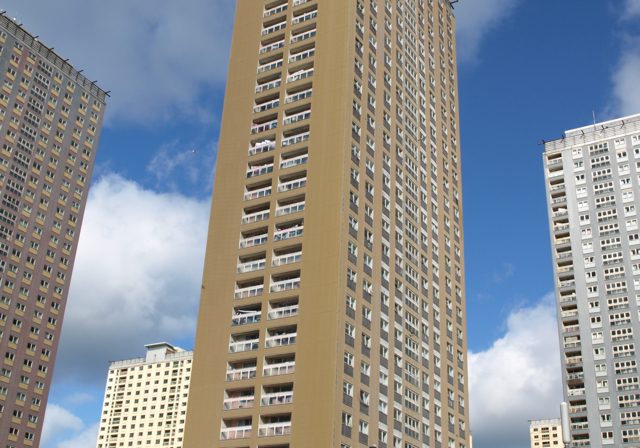 That sort of nuance has long been lost.  The image of Red Road has, in Scotland at least, become tied to a vision of public housing that must now be emphatically, unambiguously destroyed.

For this reason a global television audience is to be enlisted so that Scotland can, as Gordon Matheson has said, ‘wow the world’.

Where we used to do quiet self-deprecation, we now need to detonate our towering achievements – flawed though they were – as the prelude to an imperial sports event. We need to publically disavow having once been modern. When Glasgow City Council Labour leader Gordon Matheson tell us that it is about ‘unveiling Glasgow’s social history’, this bungled justification is in some ways more damaging than the demolition itself.

A basic question should be asked: what does Red Road mean?

Here’s Andrew O’Hagan’s protagonist in Our Fathers, talking of an allied site:

A thing of wonder, [the towers] stretch to the skies and can seem for a time great catacombs of effort.  They stand for how others had wanted to live, for the future they saw, and for hopes now abandoned.

Of course there is a legitimate impulse to remove and to renew. But the destruction of an iconic public good as a form of spectacle is pure ideology. And it takes its place within a wider repertoire of images that seek to render the municipal ideal of housing as necessarily drab, conformist and lacking individuality.  Monochrome socialism.

As if liveliness, vivacity, sensuousness – colour itself – belongs to the new architects of capitalism and the engineers of the post-political state. This is what must be resisted.