Following my Against Scottish Wildness essay, I’ve been interested to see the discussion both at Bella Caledonia and on twitter, including a lively and well-mannered exchange between myself and the John Muir Trust.

I have now had a chance to address the ostensible object of this debate, namely the consultation over the Scottish Government’s National Planning Framework 3, Main Issues Report.

But it is important. If the SNH designation of ‘core wild land’ is formally used to inform planning consent that could have significant repercussions for the ability of local people to use the natural resources at their disposal. It is a very imprecise tool to prevent the ‘wind-cities’ that so alarm the John Muir Trust. If you want to respond to this consultation you have to do so by Tuesday 23rd July.

Here is the SNH map and, further below, part of my formal response. 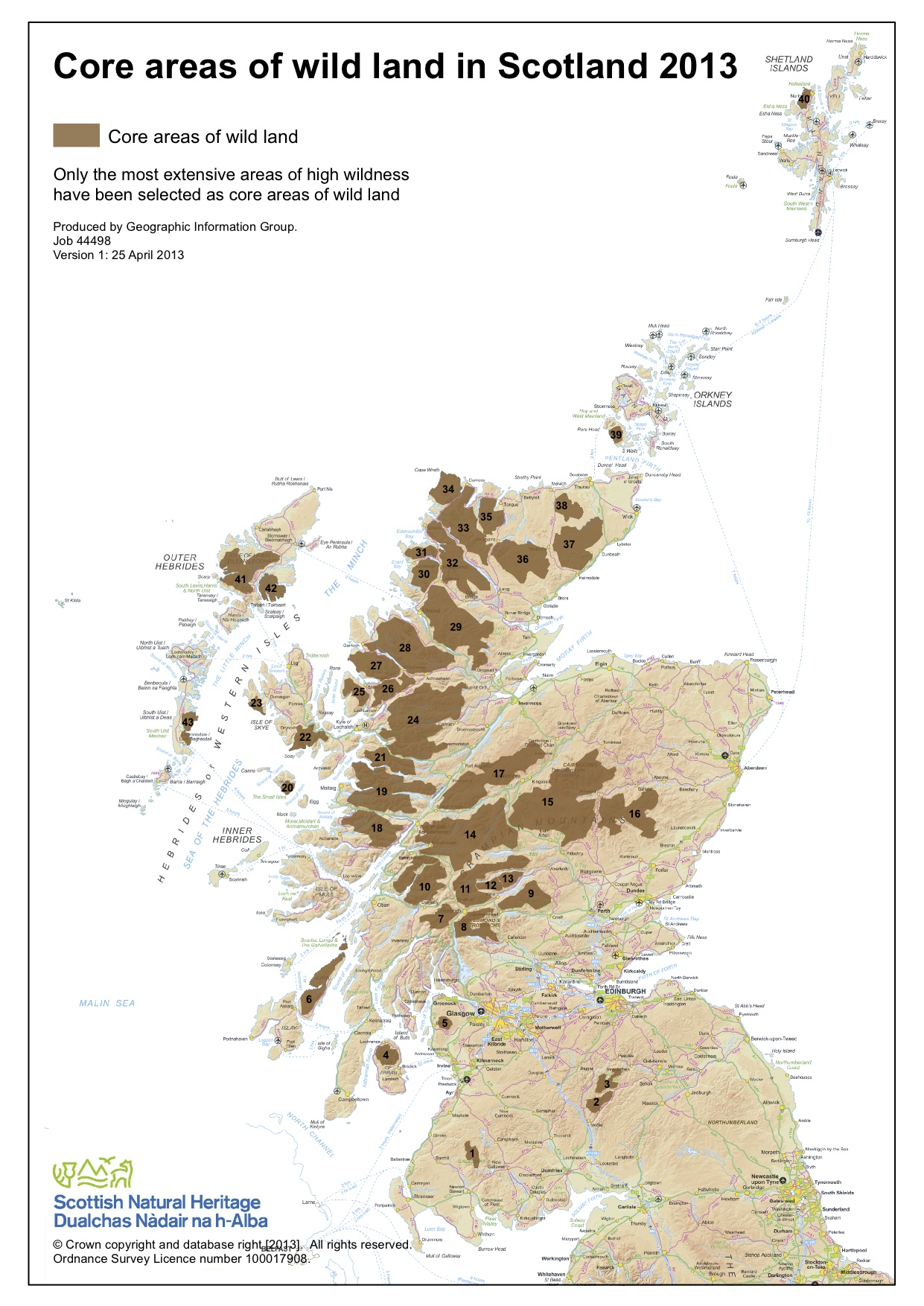 Scottish Planning Policy already safeguards areas of wild land character. Do you agree with the Scottish Government’s proposal that we use the SNH mapping work to identify more clearly those areas which need to be protected?

2.20 SNH has been updating its wild land mapping using modern GIS tools to provide a more objective approach to understanding wild land. Based on a number of attributes like naturalness of the land cover, ruggedness, remoteness from roads and the visible lack of modern man-made structures, SNH has published an updated map showing the ‘core’ areas of wild land in Scotland.

Most of what I want to say can be summed up thus: wildness is a human attribute that we ascribe to the landscape, not a quality that adheres in the landscape.

You cannot meaningfully objectify an element of human experience though SNH’s map seems to be the product of this misconception. All of this would be an arcane academic dispute were it not that such a map has the potential to limit the ways in which local people can use their own resources.

GIS is useful for many things but it would be an elementary error to say that because something is the outcome of GIS-based analysis it is then ‘objective’. My problem here is that claims to objectivity in this context are apt to conceal what is inevitably a political exercise. To designate land as ‘wild’, as this SNH mapping exercise does, is to privilege some attributes (ruggedness, remoteness etc) over others. In this way, the designation ‘wild’ brings into focus some elements of the landscape (for example scenery that conforms to a sublime aesthetic) at the expense of others (its toponymy or storyable properties; its productive potential). Unavoidably, this is a judgment about what we value and what we like; it couldn’t be otherwise. My concern is less that such judgments are made than that they are being concealed behind a veil of apparent objectivity. Any claim to objectivity in this regard is simply unfounded.

To comment on the methodology (pdf here) risks obscuring my more fundamental critique of the research design and framing. But let me draw attention to some other difficulties.

In the end, all these methodological criticisms are rather beside the point. It is not that I think that SNH could just refine this methodology and produce a better map of ‘core wild land’. The undertaking is itself flawed.

The map of ‘core wild land’ assumed from the outset an a priori ‘wildness’ that is separate from the social world. In so doing, it shoulders a great deal of cultural and philosophical baggage that might still have currency in John Muir’s America, but is no longer helpful in thinking about the future of a Scottish landscape that is, and always will be, resolutely cultural.

In writing this, I should point out that I am not some libertarian advocate of development; I am also broadly supportive of a national planning strategy.

But the Scottish Government should be aware that for many communities as well as those in environmental activism and academia, the term ‘wild’ is no longer sufficient. This is not just about how we manage the landscape. It is about how we conceive of the landscape. Our conservation charities and NGOs, hunkered down in their traditional defence of an apparently ‘wild’ Scotland, have missed an opportunity to re-think what the Scottish landscape could yet become.

The Cartesian provenance of ‘wild’ will always pit people against the environment. Our planning needs a new vocabulary that is not ashamed that our nature and our culture are, and always have been, so thoroughly intertwined.