Here we go again; it is St Kilda o’clock.

Today is the day we remember the evacuation of St Kilda, our new favourite Scottish myth of origin. The tragedy! The poignancy! The sublimity!

I’ll be honest here and admit to St Kilda fatigue. And I know that this is slightly hypocritical of me as I too have added my stone to the cairn (cleit?) of St Kilda scholarship. Back in 1998, I was critical of prior histories – by Tom Steel and Charles Maclean – that had failed to place the written sources on St Kilda within the genre of bourgeois travel narratives.

I took the view that most of what we knew about St Kilda was written by visiting elites – the very people least qualified to understand island life and culture. [My paper St Kilda and the Sublime can be downloaded as a 1.5mb pdf here]

This critical historiography was then taken up in the work of the archaeologist Andrew Fleming and others. But fifteen years later, the preoccupations of those privileged nineteenth century travellers still characterize our continuing popular interest in St Kilda.

Never mind that St Kilda was little different to numerous other island communities up and down the western seaboard. What about North Rona? Mingulay? The Monachs? Taransay? Pabbay, Harris? Scarp?

All these islands had forms of social organization quite similar to St Kilda; and their stories of endurance and ultimate evacuation are every bit as interesting. But poor St Kilda is alone left to shoulder the burden of our nostalgia. 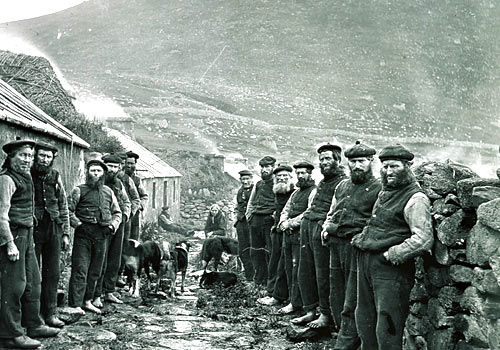 The outstanding example of this geographical fetish is our fixation with the St Kilda Parliament.  Everyone knows the photograph.

The surprise that such ‘primitive’ people might have their own patterns of governance had become a standard curiousity for nineteenth century travellers. Though various writers had referred to this meeting – a mòd – it was the journalist John Sands who, in 1876, took something ordinary and turned it into a spectacle:

“The men of St Kilda are in the habit of congregating in front of one of the houses almost every morning for the discussion of business. I called this assembly the Parliament, and with a laugh they adopted the name”.

Sands was mostly having a laugh. You can get the general idea from the title of his book, Out of the World, or, Life on St Kilda.

But then after the popularity of this publication, the photographer Norman Macleod – working for the George Washington Wilson studio – staged the now iconic photograph in playful mimicry of Westminster.

And there we have it: the St Kilda Parliament.

The point in all this is not to complain that the St Kilda Parliament is an ‘image’, and thus not ‘real’. Such attempts to separate ‘image’ from ‘reality’, ‘fact’ from ‘fiction’, are in my view part of the problem.

Rather, the project of a critical history is to understand that the ‘reality’ of St Kilda is itself constituted through numerous such images; that the lives and subjectivities of the islanders were folded into these systems of representation; and that the islanders in turn performed, subverted and re-worked these image-realities.

So that is theoretical work necessary to tackle the story St Kilda. Not for me though. I’m over it.